I first met Kevin Dean back in the late-1980s, when I wrote a story about the magnificent selection of seafood at Superior Fish for Detroit Monthly magazine, where I worked at the time. Kevin was dressed up in a wild Hawaiian shirt holding a pool toy for the photo, and we bonded about the fact that we both came from Allen Park. 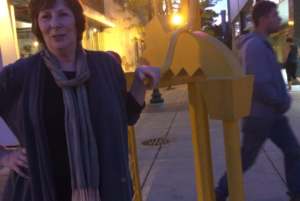 Zoom forward to this week, when I was in to do another story, this time celebrating the 78th year of his family’s company. Inside the spotless market, I interviewed architect Chris Wzacny of Bloomfield Hills, a 25-year customer who was in every week and greeted by first name. He was there for the wild bass and sea scallops. A first-time customer, Royal Oak’s Ryan Behringer, was there with his son Beckett, after hearing raves from friends about the market. He was looking for some red snapper after loving it in Florida on vacation. A few days later, I learned that it would be the final week of business for Superior Fish. Like so many fans in the metro area, the news was shocking and sad. I stopped into the store. Kevin and I hugged, and both of us welled up.

Check out our story on Superior Fish written by Patty!