Rose Morenz probably didn’t consider herself a trend-setter in 1989 when she made potato pancakes for her 6-year-old grandson Victor.

The recipe was a natural for woman of Hungarian descent. But while potato pancakes may not be as American as apple pie today, they aren’t necessarily thought of as ethnic dish either.

“There was something about them,” Victor Morenz said. “She diced all of the potatoes by hand. She had very finely diced onions. Simple seasoning. They were the best potato pancakes I’ve ever had.”

While not originating in the United States, many recipes have been so altered from what they were originally that it is often hard to think of them as ethnic.

“We’ve all grown up eating all kind of ethnic food, which basically has become American food,” Morenz said. “Tacos at this point are essentially an American food. There are probably as many taco places in America as there are in Mexico.”

Morenz, now 31 years old, and his wife, Emily Gilbert, also 31, have purchased a restaurant in Chicago that has established a reputation for what is called New American fare. 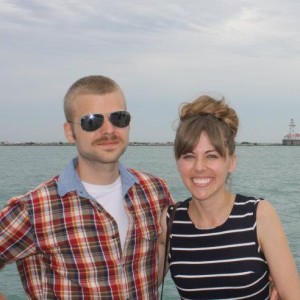 Home Bistro, or HB as it is more popularly known, became a destination spot when it was owned by the Hearty Boys, Chicago caterers Dan Smith and Steve McDonagh. They at one time hosted a Food Network show. They called their restaurant in the Boystown section of Chicago’s Lakeview neighborhood HB, a Hearty Boys Spot.

Their executive chef, Joncarl Lachman, took a New American approach but with a Dutch emphasis. He purchased the restaurant himself in 2007. Lachman owned two restaurants when he helped judge the 2010 San Pellegrino Almost Famous Chef Competition, a contest featuring 16 chefs from eight participating culinary schools, including Le Cordon Bleu School of Culinary Arts, from which Morenz graduated.

Lachman recruited Morenz to serve as a line cook at another restaurant he owned, Vincent, in Chicago’s Andersonville neighborhood. Shortly after, in January 2011, Lachman named Morenz sous (second) chef at Home Bistro, and Morenz became HB’s executive chef in January 2013.

Morenz explained how his New American approach applies to a white anchovy pinxto appetizer on Home Bistro’s menu. It includes a French canapé, with pickled peppers as a Spanish item. The anchovy is skewered with a cucumber base and piece of fried hallumi cheese, which is Middle Eastern. 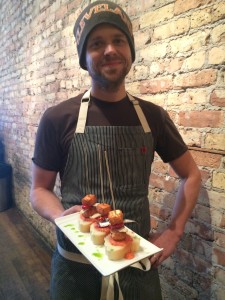 What’s American about it? “The fact that I’m American,” Morenz said. “I’m not using any ethnic preparation of anything. I’m doing it my way, which is with French technique.” For instance, in the white anchovy pinxto, “I take a pinxto from the Basque region in Spain, but put Turkish cheese on it along with the traditional ingredients of white anchovy, pickled peppers, and tomato viaigrette on a baguette slice.”

“It’s a melting pot of cuisine with familiar foods,” Emily Gilbert said of HB ‘s menu. They wouldn’t be mixed together in an ethnic approach. Wikipedia defines New American cuisine as a trend originating in the United States in the 1980s.

“New American cuisine makes innovative use of seasoning and sauces. Originally based on French Nouvelle and United States cuisine, New American has since progressed to include elements of Asian, Latin American, Mediterranean and other cuisines.”

Morenz and Gilbert plan basic aesthetic changes in the building, which features classic Chicago architecture. The structure has been owned by the Weinberger family — now David Weinberger — since the 1920s. It has about 1,800 square feet, including the kitchen, and a seating capacity of 40.

There are no expansion options at HB and restaurants in Chicago can’t have liquor licenses unless they have more than one restroom. With one restroom they can opt for a bring-your-own-bottle approach and charge a corkage fee. Home Bistro has no such fee, which makes BYOB a popular option exercised by virtually all of its customers. 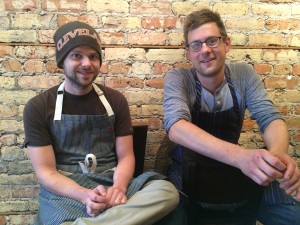 Morenz and Gilbert, who is a program assistant in gender and sexuality studies at Northwestern University, describe HB’s atmosphere as rustic, cozy, intimate, romantic and candle-lit. Morenz said HB, which has a 4.4 rating from Yelp, is a neighborhood restaurant with a lot of destination diners.

Morenz said he started cooking for fun in high school. He sought to master chicken marsala, preparing it for his family. He said running a restaurant in Chicago is a tough business., involving long hours and a lot of hard work. “But it’s easily the most satisfying work I’ve ever had,” Morenz said. “There is instant gratification every day because you get to see people really appreciating what you spent all day working on.”

HB’s staff includes Corey Bowers as sous (second) chef, who attended culinary school with Morenz, and David Devore as front-of-the-house manager, who has worked at HB since it was affiliated with the Hearty Boys. An artist who also was with the Hearty Boys, Matthew Lew, is creating some pieces for the restaurant that feature Morenz and Gilbert’s dog, Elvis. 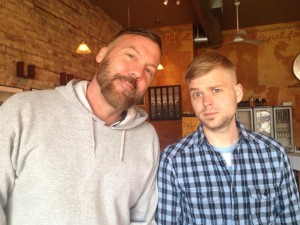 The restaurant is available to be rented out for private events on Mondays. Groups also can rent out the dining room, with a family-style option offered for $40 (plus tax and tip) for a four-course meal.